Like the Gazette, the Record was produced in Calcutta and replicated the format of successful journals such as the Lancet and British Medical Journal. It contained a similar mix of editorials, clinical observations, news items, and correspondence. It began as a monthly, later moving to fortnightly and then weekly publication. While the Gazette had a direct succession of editors, the Record was initially the brainchild of its founder and editor, James R. Wallace, a medical practitioner whom I’ll explore in a future blog post.

Upon its launch, the Record acknowledged the challenges of the periodical marketplace in British India. Its opening editorial noted that many medical journals ‘have come into existence, have served a useful purpose, and become extinct’. It identified the Gazette as one title which had ‘braved the storm’, before claiming that it intended to fulfil a different role.[1]

Wallace suggested that there was an opening in the market for his new journal since, ‘[w]hether rightly or wrongly, [the Gazette] is viewed by the large and ever-increasing body of independent physicians as an officially subsidised organ, almost exclusively devoted to the sectarian interests of the official classes’. While crediting the Gazette as an ‘able expositor of medical truths’, Wallace argued that the ‘conception of its official character’ had ‘hedg[ed] and handicapp[ed] its popular acceptance and its extended influence for the good of the profession and the public’.[2] The Record suggested that the Gazette’s reputation as the organ of the IMS had curtailed its impact. 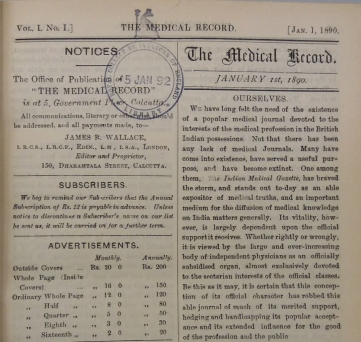 The first issue of the Record announces its objectives.

Wallace questioned the Gazette’s ability to represent the whole profession and fashioned the Record as an alternative, one aimed at ‘independent’ or ‘private’ practitioners, ‘the general body of practising physicians’.[3] In British India, terms such as ‘non-official’ or ‘independent’ were used to distinguish those who were not employed by the IMS or Army Medical Corps. The Record called for greater recognition for these private practitioners. Like other commentators, it alleged that the IMS’s monopoly on civil appointments restricted opportunities for independent medical men. Wallace also agitated for the establishment of an Indian Medical Association, and after its inception in 1895, the Record came to be regarded as its official publication.

Over the 1890s, the Record’s attacks on the Gazette became increasingly incendiary and politicised. An article entitled ‘A Bid for Popularity’ (1893) claimed that the rival journal was in receipt of the ‘misapplied support of a subsidising Government’. Wallace called for ‘honest and manly competition’ in the periodical marketplace.[4] He suggested that he had made enquiries to the Government and Provincial Government to determine the level of support the Gazette received, but that he was met with evasions.[5] He presented his attempts to expose the subsidy as a professional and public duty. This hostility towards the Gazette stemmed partly from resentment towards the comparatively high status enjoyed by IMS practitioners and partly from fears about the supposedly stagnant condition of periodical culture in India.

Wallace suggested that the Government’s support for the Gazette resulted in ‘crooked policies’ which helped perpetuate ‘monopolies that crush out every effort at honest, independent enterprise’. He denied that state support was needed to sustain medical journalism in India. He insisted that, through his own ‘private proprietary’, he had ‘placed within the reach of the local profession, a cheap and thoroughly approved fortnightly medical journal, serving all and more than the purposes of [the Gazette]’.[6] Wallace championed a free market, suggesting that the profession should be able to support its own active, independent, and commercially viable medical press.

Despite these attacks on its rival, the Record generally called for greater cooperation between medical practitioners in India. It claimed that its aim was to ‘establish a feeling of brotherhood, such as has been never known to exist in India’.[7] Its cover page shows that the editorial team comprised a range of practitioners, including those with ‘official’ titles. Further, its list of contributors indicates that it attracted a mixed readership. It received contributions not only from independent practitioners, but also those in the IMS, the Civil Medical Service, the Army Medical Corps, and the Subordinate Medical Service (SMS), which was comprised of native medical men. The Record explicitly called for contributions from men and women, and those of Indian descent.[8]

The journal even established different subscription rates to attract a diverse readership. Initially, the annual subscription cost was halved for medical missionaries, assistant surgeons, and army apothecaries. In 1895, the fee for army medical officers, civil and non-official surgeons and physicians was 18 rupees, medical missionaries and assistant surgeons paid half this price, and hospital assistants just six rupees.[9] Nevertheless, the Record apparently struggled to attract subscribers from among the SMS. In 1900, it warned that the current subscription list could not cover the cost of publication. It accused Military Assistant Surgeons of distributing the journal among themselves rather than subscribing individually. The Record suggested that this was neither ‘fair’ nor ‘patriotic’, and it called on readers who had been ‘remiss in their duty’ to turn over ‘a new leaf’.[10] This tactic exploited native readers’ anxieties, suggesting that they had erred in their patriotic duty and neglected professional etiquette.

Like the Gazette, the Record demonstrated conflicting attitudes towards race and its native readership. It often deployed crude and unashamed imperialist rhetoric and stereotypes. In 1890, it remarked that ‘[t]he turbulent, suspicious, caste-ridden Hindu or Mahommedan is now the able and willing colleague […] of the western surgeon whose predecessors taught him the science and art of western medicine’.[11] The Record celebrated the contributions of native medical men while querying how far they should participate in colonial practice. An 1896 article argued that European patients should have access to European medical attendance. It described how British troops had long been ‘doctored entirely by men of their own race’ for ‘socio-political reasons’ and claimed that non-military personnel should be entitled to similar treatment: ‘European officials naturally expect medical attendance from members of their own race’.[12]

At the same time, the Record accused the imperial administration of racism. In an article on ‘The Anglo-Indian Problem’, Wallace indicted the inaccessibility of the upper echelons of colonial medicine as ‘the progeny of official prejudice’.[13] He suggested that Anglo-Indian and Eurasian men (i.e. those born to British parents who were domiciled in India or those who were mixed-race) were disadvantaged since many were unable to travel to London for the qualifying exams. A 1901 editorial claimed that ‘in no branch of the public service in India’ – for which ‘long and laborious study and practical training’ were required – were ‘the children of the soil […] worse treated than in the medical’. It alleged that the IMS contained ‘a good proportion of men who are distinctly below the average’.[14] Wallace implied that many medical men who practised independently did so because they did not have the means to join the IMS.

The Record provides a fascinating insight into colonial medical rivalries and the interaction between professional and ethnic identities in late nineteenth-century India. Yet it has received little attention from scholars, who typically concentrate on the Gazette. This is perhaps due to the fact that the Record is less widely available (with incomplete runs in the British Library, Wellcome Library and the Royal College of Surgeons). It was also comparatively short-lived, initially folding with the death of Wallace in 1903. The Wellcome’s bound volume for that year contains a note which announces that Wallace’s executors had found it ‘necessary’ to cease publication of the Record. Yet the journal was periodically revived thereafter. Indeed, editions appeared later that year – while earlier issues bore Wallace’s name, these later versions referred only to an anonymous ‘Editor’. 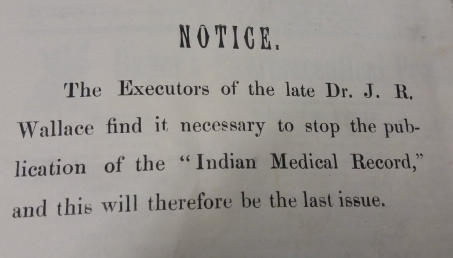 A note in the Wellcome Library’s bound volume for 1903 announces the cessation of the Record.

In 1930 the BMJ celebrated the Record reaching its ‘Jubilee’ issue, which was published under the auspices of the then-editor, S.K. Mukherji. The BMJ acknowledged the journal’s ‘chequered history’ over the previous 50 years, while commending its past campaigns against epidemic disease.[15] Significantly, a journal which began primarily as a one-man project had been resurrected, thus giving a new generation of medical writers and readers a voice. This versatility was arguably key to its survival in a struggling periodical marketplace.