The Doctor – later styled as The New Doctor – was a general medical weekly aimed at lay readers. Edited by Mr. George Shipman, a London surgeon and general practitioner, the journal sought to provide accessible advice on medical matters and was a vehicle for self-promotion. 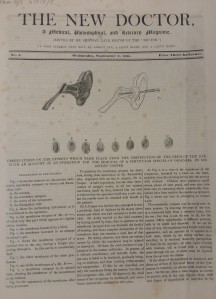 It featured a range of clinical and health-related content, with articles spanning feigned diseases, the pros and cons of drinking hot chocolate, the practice of child-rearing, and the advantages of exercise. Shipman also intervened in more politicised medical matters, commenting on nepotism in hospital appointments and corruption among the Royal Colleges. An advocate for medical reform, he celebrated the skills of the low-status general practitioner over those of the ‘pure’ surgeons and physicians who made up the medical elite. The journal also featured non-medical content with popular appeal, printing articles on foreign travel such as ‘The Great Earthquake at Lisbon’ (25 Oct 1837) and ‘The Colony of Sierra Leone’ (18 Oct 1837).

At the end of each edition was a section entitled ‘Answers to Correspondents’ (later ‘Answers to Invalids and Correspondents’ and then ‘To Correspondents’), where Shipman dispensed advice to readers, both named and anonymous. He clarified that there was no fee for these responses, unless people wanted private correspondence. Nevertheless, he often used his published replies as an opportunity for self-advertisement, urging readers to take his medicines or consult him privately. The journal typically closed with advertisements for his own remedies – such as The Doctor’s Family Medicines or The Doctor’s Stomach Pills – and his practice. Shipman advised readers that they could consult the Editor on certain weekday evenings (for half-a-crown in 1835) but that the very poor could be seen gratis on Sunday mornings. The costs and timings altered slightly over the journal’s time in print.

An advert for Shipman’s consultation times.

Adverts for The Doctor’s remedies.

Writing in the British Medical Journal in 1925, Victor J. Plarr (the Librarian of the Royal College of Surgeons) commented that Shipman was ‘emphatically what would be now regarded as an advertising quack’, keenly highlighting the medical advances and social strides made by the profession over the previous century. He characterised the domestic medicine of Shipman’s journal as ‘nearly medieval’, and presented The New Doctor as ‘An Early Victorian Medical Journal’, representing it as an archetypical publication from medicine’s pre-modern past. [1] Historians W.F. Bynum and Janice C. Wilson contend that ‘Shipman was no quack, simply a general practitioner with fairly down-market aspirations’.[2] He was a qualified practitioner, a Member of the Royal College of Surgeons, and sought to distance himself from more disreputable quacks; at one point he printed a scathing piece about public credulity in Morison’s Pills.

Nevertheless, it seems Shipman’s editorial efforts were motivated by financial considerations and that he was in a vulnerable position. In 1837, his name appeared among a list of prisoners petitioning The Court for Relief of Insolvent Debtors.[3] This was not an isolated case – Alannah Tomkins’s recent book Medical Misadventure explores the prevalence of financial failure among medical practitioners at this time.[4]

As Michael Harris identifies,  The Doctor’s  ‘emphasis on self-help diagnosis and treatment’ suggests that it was intended for ‘a mainly working-class audience’,[5] readers who might not be able to afford a doctor’s fee but who might consider themselves above the workhouse infirmary or dispensary. The way in which The Doctor was marketed as a ‘penny magazine’ suggests it sought to place itself among easily affordable and readable periodical literature. (By 1835 it was priced at three-halfpence.) Yet its subtitle also described itself as ‘Medical, Philosophical, and Literary’ in character, suggesting it wished to portray itself as more cerebral than sensational.

The journal also presented itself as a useful resource for anyone who might be out of the reach of professional medical care. In 1837, The Doctor commenced an (almost) weekly series of articles entitled ‘The Village Practitioner’. The preface to this feature noted that,

[i]n remote districts, far removed from medical advice, our publication is in many instances the only guide which is to be readily found, by which the true nature of disease is ascertained, and appropriate medicines are pointed out.[6]

The series encompassed articles on complaints as diverse as fever, inflammation of the bowels, smallpox, and rheumatism. The preface suggests that the series was intended for lay people who were unable to access a practitioner but who felt responsible for the healthcare of others. There was a long tradition of home treatments, as epitomised by Thomas John Graham’s popular book Modern Domestic Medicine (1827).

In 1835, the journal began subtitling itself as a ‘Family Journal of Health’ and from 1836 the journal specifically pitched itself as ‘Adapted for the Use of Clergymen, Heads of Families, Nurses’. The emphasis on domesticity and positions of authority was perhaps intended to convey that The Doctor was a reputable publication with a respectable readership. The New Doctor marketed itself as intended for ‘All Classes of Society’, presumably a strategy to assure working-class readers of both its accessibility and credibility. Ultimately, Shipman’s journal advocated self-help but not self-sufficiency, exposing his readers to advertisements for his own services, a practice that was becoming increasingly anathema to mainstream, professionalised medicine.

All images are from The New Doctor, 9 September 1835 (photographed in the Wellcome Library).